Online training to take your team to the next level.

HeadStartPro is the leading online course for coaches who want to win, but who also care about their athletes' health and longevity. Earn professional development credits by learning a set of coaching tools to improve team performance and injury-prevention.

The course is for coaches with athletes in the Learn-to-Train, Train-to-Train, and Train-to-Compete stages of the Long Term Athlete Development model (LTAD). The most successful athletes at this level are set apart by their ability to control their minds and control the moment. However, the biggest problem facing these athletes is injuries. HeadStartPro is the key to helping athletes achieve their full potential with performance-driven injury prevention training. 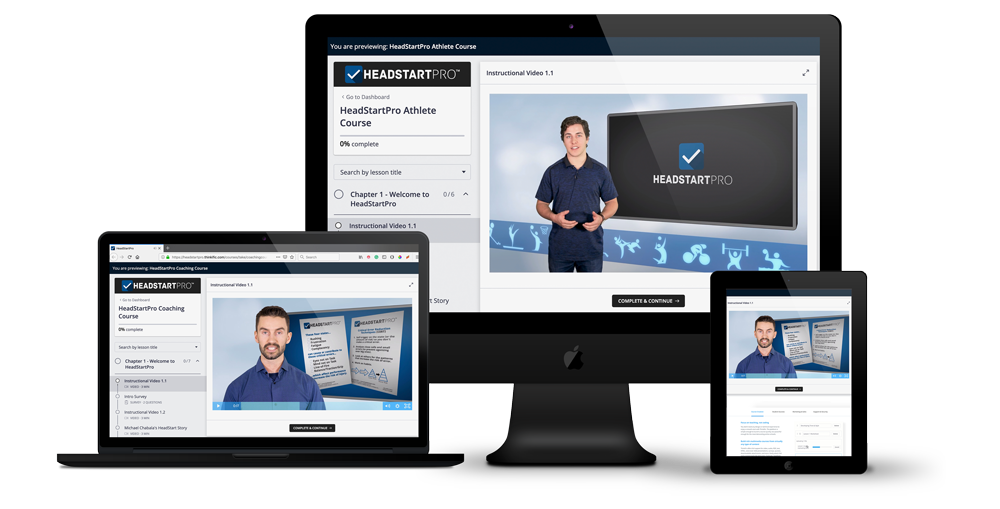 *Are you the coach of a large team? Contact us to learn more about our athlete deals.

*Are you the coach of a large team? Contact us to learn more about our athlete deals.

HeadStartPro is the leading online course designed to help coaches teach their athletes the skills needed to reach their full potential. Earn professional development credits and learn a set of coaching tools to improve team performance and prevent injuries.

HeadStartPro is for coaches who want to win, but who also care about their athletes health and preventing injuries. The course is designed for coaches with athletes in the Learn to Train, Train to Train, and Train to Compete phases of the Long Term Athlete Development model (LTAD). It's at this point in the athlete life cycle when preventing costly injuries is vital for athlete longevity, and mental game becomes increasingly important. The best atheltes are set apart by their ability to control their physical and mental states, control their mind, and control the moment.

COACH TRAINING,
ON YOUR TIME

Learn tools and techniques that help:

Canadian Coaches receive non-NCCP maintenance of certificate credits. To report your PD, use the self-report function in your coach Locker Transcript on the Coach.ca website.

Cause or contribute to

Which increase the risk of significant

We all make critical errors, even when we know how to do something well, and these mistakes undoubtedly affect our performance. HeadStartPro helps us prevent making costly mistakes with technology that extends beyond error prevention, and moves into enhanced performance to help athletes achieve peak performances more often and more reliably. We all know the power of ‘the zone’ we just don’t know how to get there reliably, so HeadStartPro helps us do just that.

Let’s face it, no course can make up for a good coach or a bad coach. But, regardless of how good you are, HeadStartPro can make you a better coach. You will find techniques in HeadStartPro that you won’t find in any other course.

When an athlete makes one or more critical errors they compound, derailing performance and crushing self-confidence. There’s a ripple effect too. It doesn’t take many significant performance errors in a game or competition to create a downward spiral for the entire team in terms of performance. However, the number one problem an athlete faces is injury or being sidelined from play. If you can’t play, you can’t perform.

When you improve the ability to control your mind, your performance-capacity rapidly increases.

If you start making critical errors and your focus becomes compromised, so does your performance and you become much more susceptible to injuries.

HeadStartPro gives athletes the ability to get in, and stay in the peak performance zone more consistently, where everything clicks and they play at their best while significantly reducing the risk of injury.

GET IN THE PEAK
PERFORMANCE ZONE

The HeadStartPro course showcases real stories told by amateur and professional athletes about performance errors and injuries. The stories illustrate how rushing, frustration, fatigue, and complacency affect athletes so that you can learn to prevent critical errors and enhance performance.

Michael Chabala is a retired Major League Soccer player (left back) from Fresno, California. Chabala started his playing career at the University of Washington before being drafted by the Houston Dynamos in 2006. Between 2006 and 2011, Michael developed as a professional player, finishing his contract with the Dynamos on a career high. In 2011, after being traded to the Portland Timbers where he quickly became a fan favorite. Impressive performances and interactions with the crowd made him an entertaining player to watch. His MLS career concluded during the 2012 season playing for DC United.

In the HeadStartPro coach and athlete courses, Michael shares his story about a dynamic performance error that leads to one of the most embarrassing (and costly) moments of his career.

Kimble Anders grew up in Galveston Texas playing football (fullback) for Galveston Ball High School. He played college ball for the University of Houston where he produced 261 carries for 1,359 yards and 16 TDs to go with 115 receptions for 1,718 and 11 scores. In 1990, Kimble began his NFL career after being signed as an undrafted free agent by the Pittsburgh Steelers. In 1991, he signed with the Kansas City Chiefs where he played for the remainder of his 11-year career. Kimble’s career highlights include 18 touchdowns in the NFL, accumulating 2261 rushing yards (NFL), and being called to the AFC Pro Bowl team three years running, 1995-1997.

Kimble Anders finished his playing career in Kansas City and returned home to Galveston, TX to coach Galveston Ball’s high school team, which reinvigorated the high school program. He’s also the Athletic Director of the Galveston Independent School District, where he brings his passion for sport and football back to his community.

In the HeadStartPro course, Kimble shares how injuries often happen when you least expect them and that it’s usually not the most dangerous part of your sport that sidelines you from play.

Kristi Richards is a former Canadian freestyle ski team member from Summerland, BC. She climbed the ranks of competition succeeding at the national and Nor-Am Cup level (North-America Cup) before joining the Canadian freestyle team and skiing in two Olympic games. In 2006, Kristi placed 7th in Turin, Italy on the world’s largest stage. Following the 2006 Olympics, she won gold at the 2007 World Championships in Madonna di Campiglio, Italy, narrowly beating her fell Canadian teammate and Olympic Champion. In 2010, Kristi went into the Olympic games, favoured to win gold on her home soil in Vancouver, BC. The event was disappointing for Kristi, but she is the epitome of athletic will and determination. In the last event of her career, Kristi placed third in the 2011 World Championship mogul event in Deer Valley, UT, USA.

In Kristi’s HeadStart Story, she shares her 2010 Olympic experience and shows learners that composing yourself at pivotal moments makes all the difference when it comes to achieving success in competition or game-play scenarios.

Professional Hockey Player, over fourteen years in the NHL

Jordin Tootoo (right wing), who wears the number ‘22’ as a play on words for his name, is one of the best-known agitators in the NHL. He signed with the Nashville Predators after the 2001 NHL draft. He became the first player of Inuit descent and the first player to grow up in Nunavut to play in a regular season NHL game. His playing career has taken him from the Nashville Predators to the Detroit Red Wings, the New Jersey Devils, and most recently the Chicago Blackhawks. At the end of the 2016-17 season, Tootoo had racked up 64 goals, 96 assists, and 717 career NHL games played since entering the league in 2003. He is currently an unrestricted free agent.

Jordin actively supports his community when off the ice. In 2015, he was awarded the NHL Foundation Player Award for displaying valued characteristics to the NHL; commitment, perseverance, and teamwork. Jordin runs camps for kids in his hometown of Rankin Inlet, Nunavut to promote hockey skill, life skills, and teamwork among the youth. He started the Team Tootoo Foundation to raise awareness for suicide prevention and anti-bullying programs for youth at risk after losing his brother to suicide at age 22. So much more than a hockey player, Jordin’s life journey has been documented in his 2014 book, All The Way: My Life On Ice.

With HeadStartPro, Jordin shares one of his stories to help young athletes learn to improve the way they play while preventing injuries.

Simon D’Artois is a freestyle skier (halfpipe) from Whistler, BC, Canada. Simon is a stand out in the professional skiing world, but not without hard work and dedication. He’s climbed the competition ranks in his home province (BC) and on the national stage before taking the world by storm. His top career highlight came after a phenomenal performance in the Winter X-games in Aspen Colorado (2015) where he took gold. Since then Simon has won multiple medals on the World Cup circuit. In 2018, he represented his country on the world stage during the Pyeongchang Winter Olympics. Simon is a current member of the Canadian Halfpipe Ski team and has his sights on the 2022 Olympics in Beijing, China.

In the HeadStartPro course, Simon shares how he uses the concepts, tools, and techniques to enhance his performance. Simon uses his perspective and experience in extreme sports to show learners how they can get in (and stay in) the peak performance zone more consistently.

Chad Moeller is a decorated professional baseball player (catcher) with over seven years in the major league and a total of 16 years in his professional playing career. He went to college at the University of Southern California where he played for the USC Trojans. In 1996, Chad signed with the Minnesota Twins where he played for four years. Chad’s career highlight came in the form of a World Series championship ring when he played for the Arizona Diamondbacks (2000-2003) and they defeated the New York Yankees in the 2001 World Series. Between 2004 and 2010, Moeller played for the Milwaukee Brewers, Cincinnati Reds, LA Dodgers, Baltimore Orioles, and New York Yankees. In 2006 he was named to the USA’s provisional roster for the World Baseball Classic. He hit 29 home runs and scored 132 RBI’s in his career.

Chad now shares his passion for the sport with youth baseball as a coach, instructor, and catching and hitting analyst. In the HeadStartPro course, Chad shares some wisdom about how most of the serious injuries happen away from the game, they happen during practice when you’re least expecting it.